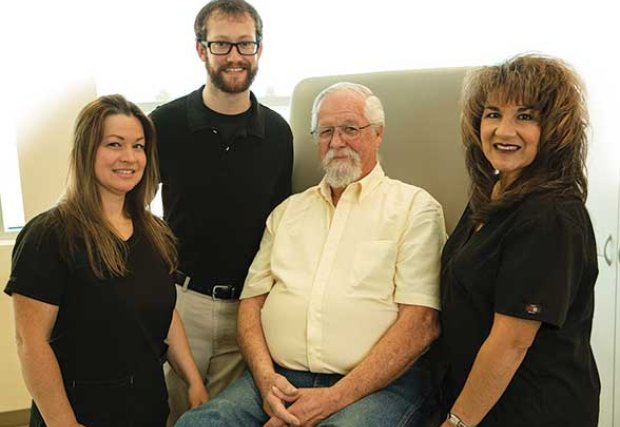 Especially for people with diabetes, wounds can be difficult to heal. This was the case for Phil Schultz, who injured the bottom of his foot while traveling and developed a sore that persisted for months.

He didn’t notice right away when the injury occurred because he had lost some feeling in his feet due to diabetic nerve damage. As soon as he saw that his foot was punctured, he knew he needed to see a doctor. “I went right to the podiatrist,” he says.

The doctor advised Schultz about the signs of infection, which can be very serious and even lead to possible amputation in some cases. In the following months, the wound would get a little better, then open up again. Schultz saw multiple doctors and tried different treatments, but nothing worked. “I couldn’t seem to get rid of it,” he says. Along with the discomfort, he became depressed. “I used to walk and ride my bike a lot,” he says. But he worried this might make the problem worse, so he stopped exercising.

He realized he needed specialized care, and began treatment with the wound care team at Desert View Hospital, near his home in Pahrump. He saw the staff there three times a week and followed a regimented, individualized plan, which included wearing a protective boot to help with healing. With dedicated care, the wound closed up, and for the first time in many months Schultz felt relieved. “I was thrilled,” he says.

After suffering with his wound for a long time, Schultz found the healing and peace of mind he needed right in his community. Going to Desert View “was the difference,” he says.