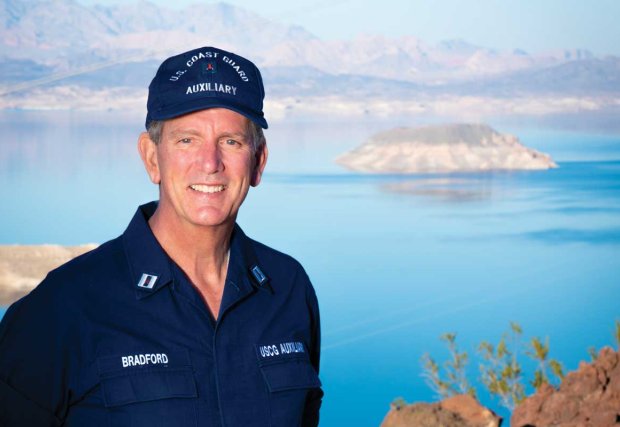 “I would not be here if it weren’t for the great quality of care.” – Doug Bradford

Doug Bradford was getting set for a fun evening of baseball at the Las Vegas Ballpark last June, when life threw him a curveball.

He was there to host a public affairs booth for the U.S. Coast Guard Auxiliary’s 80th anniversary and had forgotten his pull-cart, so he’d hefted his heavy boxes by hand into the stadium for the celebratory Las Vegas Aviators™  game. Two gentlemen kindly stopped to help him along the way, but by the time he walked to the ramp which led to the main gate he was breathing heavily. Leaning against the walkway wall, he felt a calmness, a coolness and peace come over him. “That’s the last thing I remembered, until I woke up,” he recalls.

Henderson Hospital nurse Danielle Gillespie and her boyfriend, a City of Henderson firefighter, saw him fall to the ground and jumped into action. “My boyfriend and another  firefighter checked for a pulse,” says Gillespie. “He didn’t have one, he wasn’t breathing and no heartbeat, so they began CPR while I found an automated external defibrillator (AED).”

“That’s what jolted me awake,” says Bradford of the electric shock that brought him back to life. He’d gone into cardiac arrest, and his heart had stopped for several minutes. Once he awoke, he was taken to Summerlin Hospital where doctors found that three of his arteries were almost completely blocked. “Open-heart surgery was the next step,” Bradford says. “I can’t say enough about the care at Summerlin Hospital’s ICU ... the love and the care, you could feel it.”

Bradford is back to his routine today and doing well. A Navy veteran, and after a career in the communications industry in Las Vegas, he continues to give back to the community as the Public Affairs Staff Officer for the Las Vegas division of the all-volunteer U.S. Coast Guard Auxiliary. He’s also a longtime supporter of local sports and the proud dad of two sons – one a professional baseball pitcher for the Seattle Mariners and the other a proud member of the U.S. Navy.

"Baseball has always been a big part of our lives,” he says, remarking on his 14 years coaching his sons, and the opportunity it offered for them to be “part of something bigger than themselves.” That same feeling of teamwork and unity is what he felt from the caregivers at The Valley Health System, he says.

“Every time I did my daily walk around the nurse’s station, everyone smiled at me,” he says. “That simple gesture of offering a smile reassured me. ‘You are lucky to be alive. You can get through this,’ and it made me want to do better. That, and the fact my son emphatically said to me, ‘God’s not done with you yet.’”

“When I look back over what I’ve gone through, and the support I received, I would not be here if it weren’t for the great quality of care from everyone at Summerlin Hospital.”

“Cardiac rehab definitely gave me the support at a time when I needed it.” – Meg Leighton

Overcoming certain cardiac challenges can require an extra helping hand. That was the case for Meg Leighton, who found it in the cardiac rehabilitation unit at Desert Springs Hospital.

“I did not have a heart attack, but I had a history of high cholesterol and had not been feeling 100 percent, so my PCP sent me to Dr. Sanjay Malhotra, now my favorite cardiologist, for some tests,” she says. “It turned out I had a significant blockage in my left anterior descending artery (LAD) and had to have a stent put in” to help open the artery and improve blood flow.

To bolster her heart health and confidence after her procedure, Leighton completed 36 sessions of cardiac rehab over a four-month period, where she participated in activities including stretching, walking on the treadmill, limited weight lifting, and using an arm bike, recumbent stair stepper and elliptical.

“Cardiac rehab helped me understand how to gauge how much activity was appropriate and how to increase the activity at a rate that worked for me and my heart,” she says. “The staff was amazing to work with. It was also comforting to know they were watching the monitor while I was there and would be checking my vitals throughout each session.”

“The fact that they were expecting me and I’d made a commitment to be there helped hold me accountable and motivate me to continue to show up,” she adds. Also, it was helpful to meet other people going through similar issues and share stories with them.

It has been more than two years since her procedure, and she continues to pay close attention to her heart health and keeps in touch with her team from Desert Springs Hospital. “I highly recommend it for anyone who has had a procedure and is at all concerned about becoming more active again,” she says of cardiac rehab. “Again, I can’t say enough good things about the staff!”

Outpatient cardiac rehabilitation is available at Desert Springs and Summerlin hospitals. A physician order is required. For more information, call or visit: