Promoting sepsis awareness: Do you know the signs? 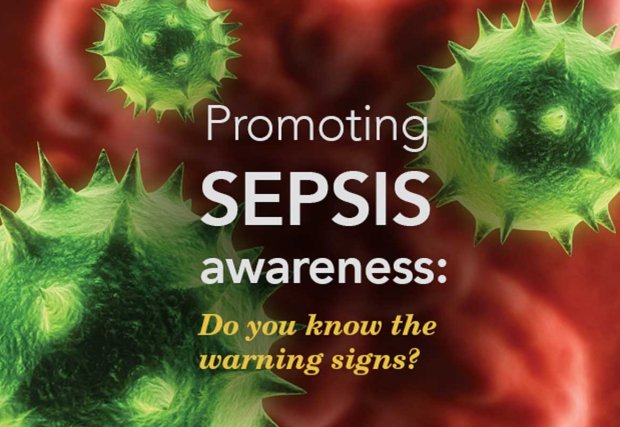 Sepsis is a life-threatening medical emergency that strikes at least 1.7 million adults in America each year*. It occurs when the body has an extreme response to an infection, causing changes in the circulatory system that can rapidly lead to tissue damage, organ failure and death. Sepsis may be associated with any kind of infection – from pneumonia or a urinary tract infection to a nicked cuticle or a diabetes-related wound.

One of the biggest challenges is identifying sepsis early and getting treatment right away. To help patients get the critical care they need, Spring Valley Hospital is working hard to educate the community, and recently earned The Joint Commission’s Gold Seal of Approval® for Sepsis Certification, demonstrating its commitment to providing safe and effective care.

“It is our goal and our expectation to identify patients and begin treatment with antibiotics within an hour,” says Sepsis Coordinator Gina Abato, MSN, RN. She refers to that critical time period as the “magic hour.” Certain tests, such as measuring levels of lactic acid, can be indicators for sepsis, but any time a patient comes in with certain warning signs, such as breathing fast or with a fever, the emergency team immediately jumps into action.

“We have a code for sepsis that is paged through the hospital,” Abato says. “Doctors go straight to that room and begin taking care of the patient immediately. We have proven that we can improve outcomes for our community.”

Anyone can get sepsis, but those at greater risk include older people, children younger than one, and people with weakened immune systems or chronic medical conditions such as diabetes, lung disease, cancer and kidney disease.

To recognize the warning signs, learn the TIME acronym:

Get medical care IMMEDIATELY if you suspect sepsis or have an infection that’s not getting better or is getting worse. Time matters.

Sepsis survivor: "I was shaking uncontrollably."

For Shirley Chipman, the first sign of sepsis started at 2 a.m. while she was visiting Las Vegas with her husband and daughter. She remembers waking up shaking, feeling like she was freezing but also burning up with a fever. At first, she thought it might be related to her diabetes, but she quickly realized she needed emergency care.

She was taken to Spring Valley Hospital where she was promptly diagnosed with sepsis and given emergency treatment with intravenous antibiotics. “The thing that impressed me the most was just the caring, careful attention,” she says. Thanks to swift medical attention, she was able return home after a few days of inpatient care. “If I hadn’t gone to the hospital, it could have been very serious,” she says.

*Centers for Disease Control and Prevention