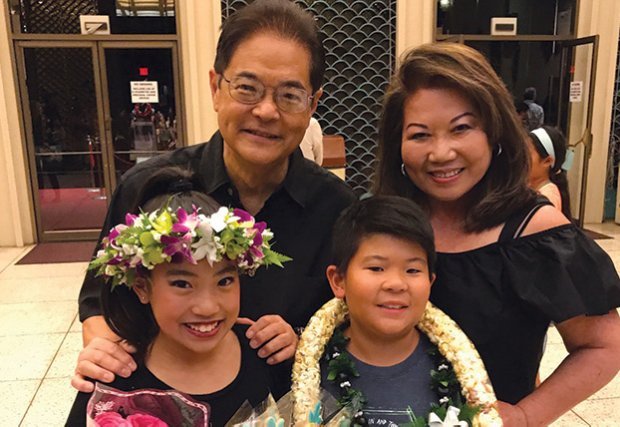 "We were just fortunate that we ended up at Spring Valley Hospital." — Fran and Malcolm Matsuoka

The Matsuokas were enjoying a “staycation” in Las Vegas when Fran had a strong premonition that something bad was going to happen. Because of this, they took it easy and spent time relaxing in their hotel room, rather than playing separately in the casino, which Fran says was a good thing because she was there to help Malcolm when he suddenly began to experience severe chest pain.

First responders were in their room within minutes, and Malcolm was taken to Spring Valley Hospital, where Fran says that “everybody was just so efficient” and got Malcolm into the cath lab right away. Cardiologist Sanjay Malhotra, MD, explained that Malcolm was having a STEMI heart attack caused by a blockage in his artery, and he needed immediate treatment to open the artery and restore his blood flow. “We are committed to getting this procedure done in a super-fast fashion,” says Dr. Malhotra.

Dr. Malhotra later told Fran that while Malcolm was in the procedure, his heart went into ventricular fibrillation and had to be shocked six times to get it into a regular rhythm. The issue was resolved swiftly, and Fran was thrilled to see that Malcolm was his old self when he woke up, with no negative cognitive effects. The doctors and nurses were “just fabulous,” Fran says. “They took such wonderful care of him. We are so thankful to Dr. Malhotra for not giving up on Malcolm.”

Malcolm continued his recovery with outpatient cardiac rehab at Desert Springs Hospital and is doing great. He and Fran say that his desire to see their grandchildren grow up kept him fighting. Plus, he and Fran have a bucket list to work on. Fran calls his great outcome the result of miracles, including going to Spring Valley Hospital for care. “I cannot say enough about them,” says Malcolm. “We are very grateful.”

Spring Valley Hospital has specially trained physicians and nursing staff to treat a broad range of emergency and non-emergency heart conditions, as well as advanced diagnostic and imaging technology to test for and diagnose heart disease.