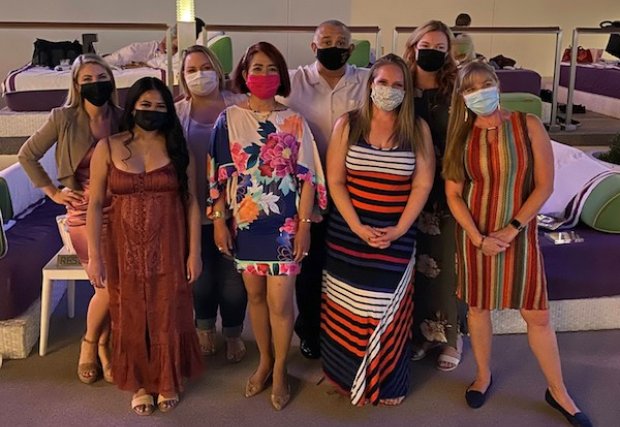 Nine Valley Health System employees were honored as 2020 healthcare heroes by The Cosmopolitan of Las Vegas during a special awards celebration on May 10, 2021, at the rooftop Boulevard Pool overlooking the heart of the Las Vegas Strip.

Brian Abeyta, a paramedic with Bullhead City Fire and Henderson Fire Department, also works per diem for the ER at Green Valley Ranch, an extension of Henderson Hospital’s Emergency department.

Amanda was nominated by Chris Loftus and Joyce Malaskovitz, the CEO and CNO respectively for Desert Springs Hospital. Her nomination read, in part:

As the pandemic began, Amanda’s unit was converted to house COVID patients to keep patients and staff safe from exposure. When the first COVID positive patient was admitted, Amanda was the FIRST nurse to immediately volunteer to care for this patient.

Amanda instilled confidence in that patient and her teammates. She became a champion at the hospital and educated her teammates on lessons learned. She always ensured that her teammates were comfortable and confident with new safety protocols, PPE requirements, and enhanced processes. Despite the heavy stress, she was also the biggest cheerleader for her teammates, keeping spirits high and relentlessly staying positive with a smile!

Amanda not only sacrificed for her community and teammates, but made personal sacrifices with her family as well. While volunteering to assist the organization in any way possible, she too feared that she could potentially somehow bring COVID home and expose her three small children. In order to protect them, she sent them to their grandparents for six weeks and utilized FaceTime to connect with them.

“I’m so incredibly proud of our team,” said Karla Perez, Regional Vice President of The Valley Health System. “When everyone else was staying home, they showed up. They navigated through the unknown, providing support and reassurances, sharing prayers and tears with patients, families and colleagues. Their sacrifices are innumerable and immeasurable. We are beyond fortunate to have them caring for our patients, and I’m thankful The Cosmopolitan took the time to celebrate them.”

In honor of the resort’s 10-year anniversary, The Cosmopolitan launched a contest in February 2021, accepting nominations for local frontline workers, medical personnel and individual heroes whose achievements exemplified “Vegas Strong.” More than 700 nominations were received, which was narrowed down to 10 winners plus one grand prize winner. The honorees were then evaluated by the resort’s Community Team for a final determination.

As the grand prize winner, Amanda received a VIP multi-day experience, including a stay in one of The Cosmopolitan’s exclusive Boulevard Penthouses, 24-hour butler service, a helicopter tour of the Las Vegas Strip, private dinners at Scarpetta and Jaleo, spa experiences and more.

The other honorees received the Misfit Right In anniversary package which included a two-night stay in a Wraparound Terrace Suite, dinner for two at Scarpetta and a celebratory champagne amenity.

The Cosmopolitan also celebrated a number of Valley Health System employees as runners-up, providing a gift card for $100 to enjoy at one of their restaurants.