Caring for Southern Nevada for Half a Century 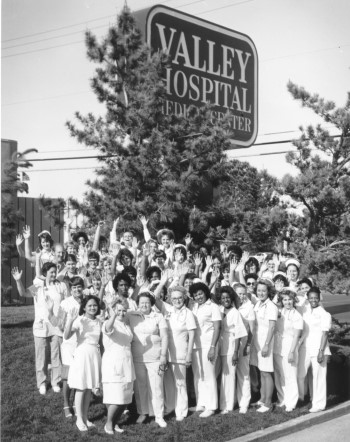 Originally built as a nursing home, Valley Hospital was converted into an acute care hospital by seven local businessmen. In 1979, it was acquired by Universal Health Services, Inc., creating the foundation of one of the largest hospital management companies in the United States. Today, the 328-bed hospital specializes in advanced cardiovascular and neurological care, emergency and surgical services, adult behavioral health and outpatient wound care and hyperbaric medicine care.

“When you think about the incredible growth in population and tourism over the past 50 years, and the role Valley Hospital has played in saving lives, caring for patients and training our future physicians, it’s a pretty impressive arc,” said Claude Wise, Chief Executive Officer of Valley Hospital. “Valley Hospital’s culture and its commitment to caring for patients, families, coworkers and our community is one of its greatest strengths.”

In 2020, Valley Hospital was the first hospital within The Valley Health System to become an Advanced Comprehensive Stroke Center from The Joint Commission and The American Heart Association®/American Stroke Association®. The hospital was accredited as a Primary Stroke Center and established its neurology residency program in 2007. Among the advanced neurological procedures performed at the hospital are mechanical thrombectomies to treat large vessel occlusions and transcarotid artery revascularization, a minimally invasive procedure that utilizes a “reversal of blood flow” approach to protect the brain during insertion of a stent to address a narrowing in the carotid artery (carotid stenosis). This can help decrease the risk of perioperative and long-term stroke rates.

In 2006, Valley Hospital established its graduate medical education program for physicians. Today, it offers residencies and fellowships in family medicine, internal medicine, neurology and orthopedic surgery, and fellowships in pulmonary critical care and gastroenterology, along with a pharmacy residency program. Many graduates of these programs have established their practices locally, joined other medical practices locally and nationally, work as ICU intensivists throughout Las Vegas hospitals, continued their service with the military or pursued additional fellowships for advanced training.

On the Small Screen and Big Screen

Valley Hospital was featured in the 1970s television show “Vegas,” starring Robert Urich as Dan Tanna, and its exterior was briefly showcased in the 2016 movie “Jason Bourne.”

Flight For Life was the first hospital-based air ambulance service in Southern Nevada and had an air speed of 140 mph. Established in February 1980, it made 365 patient flights its inaugural year. In December 2001, the service was sold to Mercy Air, having logged approximately 20,000 flights within a four-state radius. Over the years, the Flight For Life crews have been recognized on numerous national programs, including “Trauma-Life in the ER,” “Paramedics” and “Las Vegas Medical,” a Discovery Health Channel program.

Over the years, Valley Hospital was the first in the community to provide new services and technological advances that are now taken for granted. For example, it was the first Nevada hospital to initiate a new program to prepare intravenous medicine (1974), install a CT scan (1977), offer the region’s first hospital-based air ambulance service (1980), perform a successful percutaneous transluminal coronary angioplasty in Southern Nevada, organize the state’s first eye bank (1982), install the first MRI in Clark County (1987) and offer labor-delivery-recovery suites in its obstetrics unit (1987).

See what Valley Hospital has to offer →