A Special Thank-You to Veterans 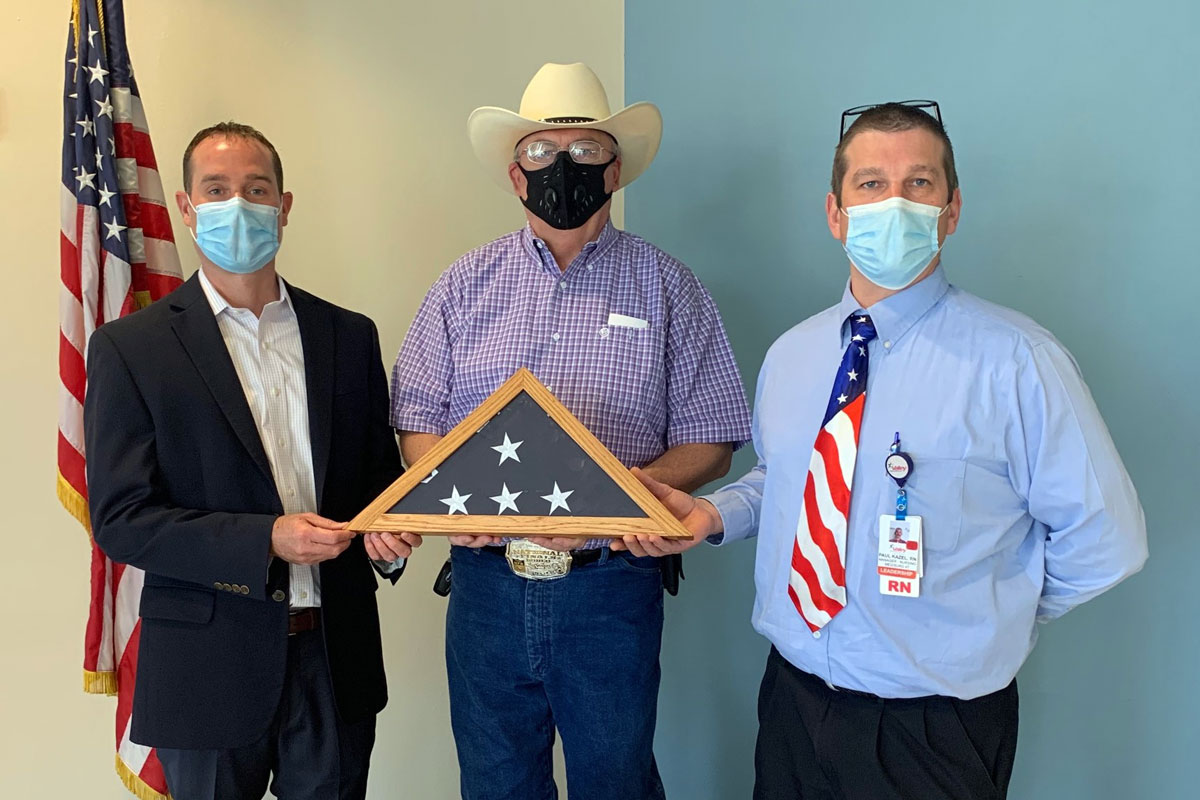 As a U.S. Navy veteran and the son of a veteran, Valley Hospital Nurse Manager Paul Kazel understands that receiving an American flag in recognition of guarding and protecting the United States is a special honor. "[At my father's funeral], I felt a great sense of pride that my father was recognized with the symbol of what he fought for, and it hangs in my house to this day," said Kazel.

"No one can truly know what it is that our veterans have gone through without walking a mile in their shoes, seeing what they saw, and doing what it was they had to do, to protect those that they loved and those that they have never met," he said. "As a civilian, my thoughts turned to how we could thank our veterans who protected our country and way of life. In their final hours, our veterans are honored by our hospital staff for their service and their sacrifices. And, when our veterans are also organ donors, they demonstrate their continued selflessness and desire to help others live and spend precious time with their loved ones."

The Final Honor Call to Duty

Thus was born the Final Honor Call to Duty. Simple, elegant and respectful, a small star (bull) flag is placed over the veteran with the canton lying over the left shoulder, before the family comes to the bedside to say their goodbyes. This smaller flag is used at the hospital because a veteran is allotted only one large star flag, which is given to the family at the time of the funeral, per the U.S. Department of Veteran Affairs. After loved ones leave the bedside, the flag is removed, folded according to specifications, placed in a display box and presented to the family with a letter thanking them for their loved one’s service to the country, along with the care team’s condolences.

For veterans who are also organ donors, the flag remains in place while they are wheeled to the operating room with hospital personnel lining the hallways to show their thanks and respect for the organ donor.

"No duty is more urgent than that of returning thanks."
– James Allen, author

Claude Wise III, CEO of Valley Hospital and son of a U.S. Army veteran, is gratified to offer this thanks to patients. "I'm very proud of my dad’s service," he said. "Our southern Nevada community is home to many active duty personnel and veterans, and it's a privilege to care for them. We understand that our armed forces are more than the men or women who served. They're also their families who served with them."

Heartfelt Support From a Fellow Veteran

The Final Honor Call to Duty received its first five flags and shadow boxes with the assistance of William "Bill" Dolan of Pahrump, Nevada, a U.S. Army veteran and Disabled American Veteran (DAV) advocate. "We believe in one another, we put our lives in each other's hands," Dolan said. "There is an unwritten pledge that 'No one is left behind on the field of battle.' The flag presentation is a final tribute to our brother or sister as they leave the field of battle. I have made it my duty to help my fellow brothers and sisters through whatever it is they are going through."

"I felt this tribute was so important because, as a veteran myself, I sometimes feel the things I’ve seen, I’ve done and the decisions I made in the duty to my country are forgotten by so many, and may never be understood," said Kazel. "Whether it's the Final Honor Call to Duty or we see a veteran, police officer, firefighter or active member of our armed forces, it's important to thank people for their service. This means something to us. It means we are not forgotten, and that everything we did and went through really was for something."

Paul Kazel, RN, 4 Tower Nurse Manager, served in the U.S. Navy for eight years. He later worked at both Desert Springs and Centennial Hills hospitals as an ER technician, earned his registered nursing license, and has been with Valley Hospital for almost eight years.

Bill Dolan donated five flags for the Final Honor Call of Duty through his Dolan Ranch LLC, and also donates funds to his fellow DAV member who builds the display cases. He served in the U.S. Army from 1972-1982, serving in many overseas assignments in Vietnam, Korea and Germany. Bill is the current Department of Nevada, Judge Advocate and Nevada Department of Veterans Services, Veteran Advocate. He was appointed by Governor Brian Sandoval as a member of the Southern Nevada Veterans Cemetery Advisory Board for Southern Nevada. Bill served as the DAV Department of Nevada Commander from 2017-2018 and is Deputy Chief of Staff for the current DAV National Commander and two other Past DAV National Commanders.

About the Presentation of the Flag

The American flag has been draped over military veterans' coffins since the Napoleonic wars (1796-1815). The custom is rich with tradition and requires certain protocols. Flags draped over coffins honor the memory of military members who serve the United States, according to the U.S. Department of Veterans Affairs. Burial flags should never touch the ground, and when being used to drape a coffin, should never be lowered into the grave. The flag should be removed from the casket and folded into a triangle with only the union, or the blue field, showing. It will then be given to the deceased's next of kin, friend or specified associate.

How to properly fold the American flag ↗