"We Just Fell in Love With Valley Hospital" 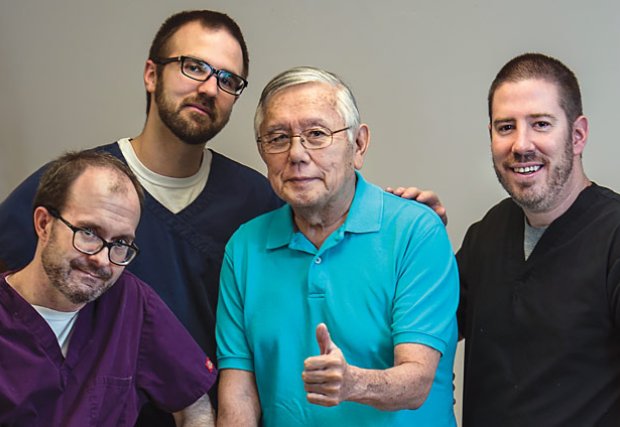 Harry Morodomi’s goal was to get back home with his wife, Geri, after suffering a stroke in December 2016. His hard work during inpatient rehabilitation, and the support of his wife and therapy team, helped him get there.

“It all happened unexpectedly,” Geri remembers of Harry’s stroke. She’d gone shopping in the morning. When she returned home a little later, she found Harry lying on the floor. He was conscious, but his speech was slurred. After some resistance, Harry agreed they needed emergency help, and Geri called 9-1-1.

Harry, 71, had suffered a hemorrhagic stroke, explains Jill Pichette, MS, CCC-SLP, Director of Rehabilitation and Therapy Services. This can occur when a weakened blood vessel ruptures and there is bleeding in the brain. His condition was treated with medication, and four days after his stroke he continued his recovery in Valley Hospital’s acute rehabilitation center.

Andrea E. Pernell, DO, Medical Director of Valley Hospital’s acute rehab unit, notes that a goal of inpatient rehabilitation is to help patients become as independent as possible. Three hours of daily therapy are provided, plus patients receive 24-hour support from therapy nurses, which makes a big difference, she says.

“Anything Harry wanted, they were there for him,” says Geri, who was at the hospital each day. One of the therapists that Harry became especially close to worked with him on walking so he would be able to make it up several steps into the house when he went home. “He even showed us how to get in and out of the car and gave me hints and clues,” says Geri, who wanted to learn everything she could about how to help her husband.

Harry returned home on January 20 and is now working on his continued recovery. Geri gets a little teary when she talks about the compassion and support of the hospital staff. “We were so happy with the care,” she says. “I’ll refer anybody I know to Valley Hospital.”

Recognize These Signs of Stroke and Act FAST

The most common symptoms of a possible stroke can be remembered by this acronym:

FACE: Ask the person to smile. Does one side of the face droop?

ARMS: Ask the person to raise both arms. Does one arm drift downward?

SPEECH: Ask the person to repeat a simple phrase. Is it slurred or strange?

TIME: is critical! If you see any of these signs, call 9-1-1 immediately.

If these symptoms appear, don't wait! Call 9-1-1 or seek medical attention right away.