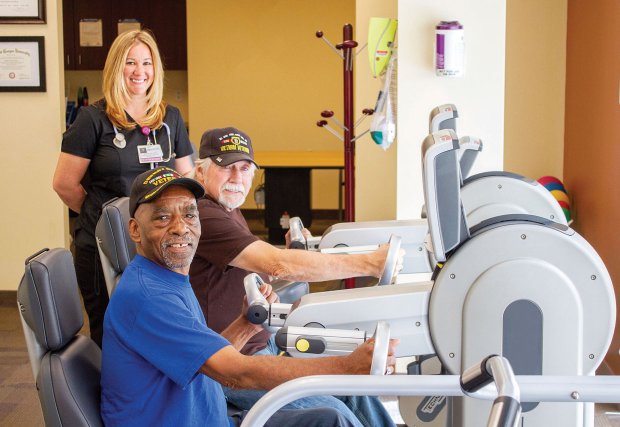 Tackling life’s challenges can be better when you do it with others. That’s the case for David Leazer and Edwin Romprey, who became friends through the Pulmonary Rehabilitation program at Centennial Hills Hospital.

“I was referred by my doctor at Nellis Air Force Base because I have chronic obstructive pulmonary disease (COPD) and shortness of breath,” says Leazer, a retired U.S. Air Force member and Desert Storm veteran. During rehab, he performs different exercises to build his stamina. He’s also learned breathing techniques and received tips on diet and nutrition. “It’s been very beneficial to me,” he says, commenting on the difference it made during a trip to China. “With the exercises that I was doing before I went, it really helped me as far as walking and climbing hills and steps.”

Through the program, Leazer was introduced to retired U.S. Air Force veteran Edwin Romprey, who served in Vietnam and also has COPD. “We have a lot in common,” says Romprey. Frequently, they take turns getting their vital signs monitored by their therapist, Jessica Martin, RRT, and then do their warmup exercises together. “We all kind of cheer each other on,” Leazer says.​

Is Pulmonary Rehab Right for You?

“Pulmonary rehabilitation is recommended for anybody who has COPD or any respiratory issues, such as pulmonary hypertension, emphysema, chronic bronchitis and others,” says Samantha Lafata RRT, director of cardiopulmonary services and interventional radiology at Centennial Hills Hospital. The program is available at these two Valley Health System hospitals for patients with a physician referral:

Romprey says that the help he’s gotten with the “little things” has made a big difference. “Sometimes when you’re having a hard time breathing, you forget to breathe,” he says. He recalls how his therapist reminded him to breathe when he bends down to tie his shoes. Also, working on his endurance helps him keep up with activities like golfing and riding his Harley-Davidson® three-wheel motorcycle.

Both he and Leazer remarked on the supportive care they’ve received. “The therapist is knowledgeable, very caring, very personable,” says Leazer. “I’m very pleased going through this program,” Romprey concludes. “I know I need it, and I appreciate that it’s there.”

A Better Breathers Club support group for individuals with COPD and other lung diseases is held the second Tuesday of each month from noon to 1 p.m. at Centennial Hills Hospital, Conference Room 1. Caregivers and family members are welcome. For more information, call 702-629-1579.