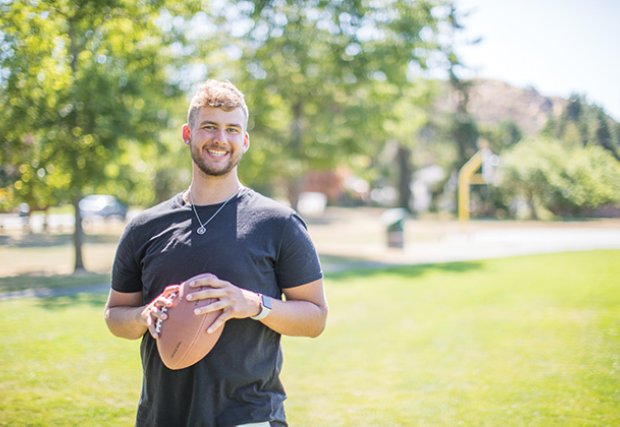 … that there are great people and a great hospital in Las Vegas. — Sheldon Mack

There are times in life when we all need a guardian angel. Sheldon Mack found his last October at the Route 91 Harvest Music Festival in Las Vegas.

A resident of Victoria, British Columbia, Sheldon had traveled to the concert with friends to celebrate his 21st birthday. After the gunfire broke out, he was helping someone else when he was struck in the abdomen and his forearm. Amidst the chaos, a stranger came to his rescue, applying pressure to his stomach to contain the bleeding and staying with him until he arrived at Desert Springs Hospital, where he underwent emergency surgery to repair a ruptured colon and a broken arm.

Shortly after the shooting, during an interview with ABC World News Tonight anchor David Muir, Sheldon spoke about the unidentified man who helped him, “He wouldn’t leave my side, saved my life. ”Shortly after that story aired, Sheldon had a chance to personally thank his hero from that night, Jimmy Grovom, of Orange County, California, who visited him at the hospital.

Sheldon’s father, former CTV Vancouver Island news anchor Hudson Mack, said of his son’s recovery, “The heroism of first responders and bystanders was matched only by the community support and kindness we received during this ordeal, from authorities and the people of Las Vegas to our friends at home and people we have never met.”

Sheldon spent 10 days receiving specialized care at Desert Springs Hospital before he was cleared to return to Victoria to continue his recovery. “Desert Springs Hospital treated us like family,” Sheldon’s dad said. “Thank you to all the hospital administrators, nurses, physicians and everyone who helped save our son’s life.”