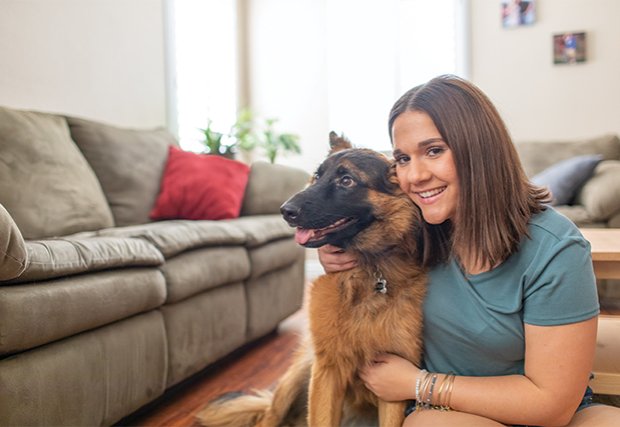 When shots rang out at the concert in Las Vegas last October, then-18-year-old Rylie Golgart immediately called her dad, who was also at the concert, to tell him she was okay. Moments later, everything changed.

As the gunfire continued, Rylie was hit in the back by one of the bullets. A local off-duty firefighter came to her aid as her dad, a longtime detective with the Las Vegas Metropolitan Police Department who was helping other victims, rushed to be with her. “My heart felt broken … I couldn’t get back to her fast enough,” said Richard Golgart in a news story* about that night.

Together, Rylie’s dad and the firefighter transported Rylie to Valley Hospital, where doctors performed an exploratory surgery on her abdomen to see if she was bleeding internally. She wasn’t, but the bullet was fragmented in her vertebrae and had paralyzed her temporarily. Rylie underwent surgery with neurosurgeon John Anson, MD, who skillfully removed the bullet, and her family recalls that she began to regain feeling almost immediately. She then spent two weeks at Valley Hospital before heading to a rehab facility in Colorado that specialized in spinal injuries.

A former high school soccer player, Rylie has had to relearn many things, including how to walk. She has come a long way with hard work, determination and the support of her family, friends, medical team and service dog, “Grace.”

While the road back has been challenging, she says she is feeling better, physically and mentally. “Thank you to all the amazing nurses, doctors and staff at Valley Hospital. I wouldn’t be where I am today without their help.”